How Much Does A Bison Weigh? 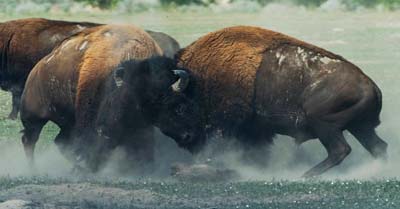 If you have seen a bison up close you likely have a pretty good idea about how big they are. If you haven’t, it’s can be pretty hard to imagine.

They are huge, not only in size but in presence. They are such domineering animals it’s a wonder that anyone managed to hunt them at all. When you consider how fast they can be on top of that, it becomes even more impressive. But how much does a bison weigh precisely? You are in the right place. This article answers all that and more.

‍How much does a bison weigh?

How much an individual bison weighs depends on two things. It’s gender and it’s age. A fully mature male bison can weigh as much as 5 times more than a young cow (female).

Why are bison so large?

The mere fact that bison are indeed so large is fascinating to many people. After all, how can an animal that eats nothing but grass get so big? Cows don’t get anywhere close to the size of a bison, so how do they do it? The answer is that bison have incredible stomachs. Their stomachs are filled with some incredible microorganisms that break down grass, specifically the sugars found in them and convert them to fats. Bisons store this fat all over their body as an insulator.

The bigger an animal is the harder surviving a harsh winter can be. This is why bears hibernate. Bison don’t hibernate, they instead live off of their huge fat stores and whatever greenery they can manage to find. Sometimes there is plenty, some times there is none. It isn’t uncommon for herds of bison to be decimated by a very harsh winter.

Where do bison live?

American bison live throughout the North American continent. They can be found all the way through the United States and up into Canada. They typically live in flat grassy planes or river valleys. They drink a lot of water individually and as a herd. This is why they tend to hug large water sources when they travel around.

Since they don’t have that many predators they can choose their territory pretty freely. If there are no grassy plains bison will migrate to scrubland. This isn’t optimal for them, but they will manage. They are very hardy animals, it takes a lot to kill them off. This is why it was so hard to hunt them. Especially before powerful guns entered the equation.

How were bison hunted?

When European settlers made their way over to the new world, they brought with them guns and ammunition. This made hunting bison quite easy in comparison to how the native populace had been doing it. Bison could be sniped from hilltops or bombarded from horseback at close range.

Bison pelts were very valuable, not to mention they were one of the best sources of meat. Their pelts were shipped back to Britain, France, and Spain for quite a pretty penny. This led to bison being hunted almost entirely to extinction. At one point, only around 100 bison remained. The native populace didn’t have the luxury of powerful firearms. Instead, they had to make do with bows, arrows, spears, and their brains. One of the most common tactics for hunting bison was forcing them to stampede off a cliff. This was pretty brutal and very messy, but it got the job done. It can be very hard to pierce a bison’s skin with a bow and arrow. Let alone kill them.

Hopefully, you now have a pretty good idea about how much a bison weighs. They are huge animals that are immensely powerful. A male bison, once he gets going, can be almost impossible to stop. This is what made hunting them by forcing them off cliffs so effective. While it is true that bison populations did almost die out completely, they are doing pretty great now. In most areas, they are protected species to prevent them from getting close to extinction ever again.

How Much Does A Bison Weigh?