How Much Does A Brown Bear Weigh? 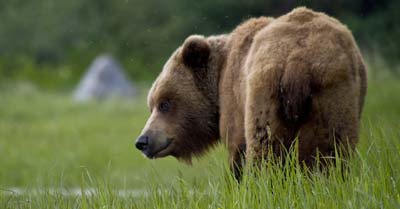 The last thing you’ll worry about if you see a brown bear in the wild is wondering about their weight. The number of incidents per-year where brown bear attacks are reported is more accurate than this question. However, the question does need to be asked: How much does a brown bear weigh? The answer is: Between 1500-2400 pounds in the wild and captivity.

Yet some factors determine the exact weight due to age, sex, feeding habits, and geological location. We will delve deeper into all of these issues to give a better understanding of why their weight differs so much. And it seems that the term: the Brown bear is just a name. To be more precise, there’s more than one type of brown bear species in North America. Let’s find out who they are?

‍In the name of science

Within North America alone there are many different kinds of brown bears. Over the centuries they have interbred with others in their territory, but are not exclusive to one set species. Their class name is Ursus arctos, and at one time they were classified into nearly 58 species. And you thought the current online banter of how many genders are there’ was head-spinning, think again. There are officially only three in this classification.

The interior grizzly bear is also native to Alaska but is not limited to the Canadian providences. These include Alberton, British Columbia, Yukon, and the Northwest territories. In the US they cover the following states: Washington, Wyoming, Montana, Idaho, and of course Alaska.

These are inland Grizzly bears moreover. Male bears at the end of their first year can weigh 150-200lbs. After that, they can grow from 330-1150lbs over the next 12 years. Females will not be as heavy, growing-up to reach a maximum of weight of 270-770lbs, within 8 years. Male bears tend to be 1.2-2.2 times heavier than female bears.

A newborn cub can weigh 1 pound at birth and grow to more than 20 pounds while being nursed. This is when a cub will be allowed to emerge from their mothers’ den.

Kodiak bears are the largest of the group and have often been compared to Polar bear weight and size overall. Adult males can reach 660 to 1320lbs, however, they have been known to reach between 1500-1656 pounds. The heavier Kodiak bears were recorded after higher food sources allowed them to gorge. Females can be 30% lighter than males and weigh anywhere from 399-701 pounds. Kodiak bear cubs are born weighing 1 pound (450gm) and will emerge from their den when they reach 15-20 pounds.

Born to be wild?

Not all brown bears’ weight will be the same since there is plenty that has been born in captivity. This will mean that they are given more opportunity to eat as much as they want. There are record cases where some brown bear varieties can reach an incredible mass. So who says the good life is all about living in the wild?

The largest ever-known Kodiak bear in captivity was living in the Dakota Zoo located in Bismarck, North Dakota. He reached 2130lbs at the time he died in June of 1987. The previous year it’s estimated he weighed up to 2400 pounds based on photo evidence.

Another large specimen that was popular in the San Diego Zoo from the 1970-1980s grew to be 15 years before he died in captivity. He reached 800 pounds before his death in 1985 due to twisted intestines (volvulus syndrome).

A sad reminder that even in captivity, the excessive nature of over-feeding would be his doom. Goliath lived in a small enclosure at an attraction called Space Farms in Sussex, New Jersey. From 1967-1991 this captive Alaskan Grizzly bear grew to an incredible 2100 pounds before his death.

Other attributes to weigh-in

While it is not uncommon that in the wild the weight will also depend on the pecking order. In nature, the stronger of the sexes is the dominant male. They will always have first dibs at any food source followed by the female and then cubs. It is not determined that food supply is rare but since brown bears will forage, their task is to gather food at all times. Other elements will determine brown bear weight is due to the region or season.

Brown bears will fill their bellies with several spawning fish at lakes or rivers in high season. They will need these high-fat foods to survive long hibernation in the winter. When there is plenty, they will feed until they are stuffed. Males and females can bulk-up in a very short time by several hundreds of pounds.

When food sources are not so common, bears will search out squirrel nests and raid their collected cache. The same will apply to bee nests where honey can add the calories they need. Anything else is on the table including roots, green plants and all sorts of insects that are high in protein.

How Much Does A Brown Bear Weigh?