How Much Does a Deer Weigh? 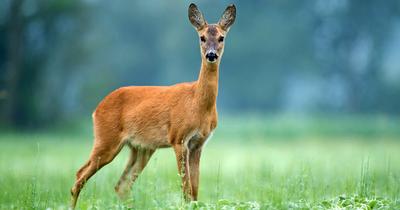 Regardless of whether you are a hunter, a conservationist, or simply a curious party, you may be wondering just how much a deer weighs.

The common White-tailed deer that we have in the United States can weigh anywhere from 100 lbs to 150 lbs.  However, there are many deer species out there - and their weight can range from 20 lbs to as much as 1,300 lbs - or even more.

When we typically think of a deer we imagine the average White-tailed deer, which are common to see here in the United States.   However, there are actually many different types of deer in the world and our nation, which many people have assumed are related to another species.  This timid and sometimes elusive animal can be found in almost all corners of the Earth - from China to the Middle East, and beyond.  In fact, deer roam every continent except for Antarctica and Australia!  With that being said, this is a very dynamic species and you will see great fluctuations in its characteristics and its weight.  Let’s explore this further by analyzing some of the different deer species.

After working with various conservation groups around the world, I have had firsthand experience studying the different species and subspecies of deer that are found on our planet.  My in-depth analysis has shown me that deer can vary in weight depending on their species type and their geographical location.

There has been a bit of oversight as to just how many different deer species there are on our planet.  A major component of this has to do with how deer have been portrayed in western society.  Since our childhood, we were conditioned to associate deer with Reindeer, which we all grew up with as an iconic emblem of Christmas.

However, while Reindeer are a classic deer species, they are by no means the only type out there.  Thanks to the hard work of conservationists and zoologists, we have been able to discover far more deer species than we ever thought existed.  The study of this animal has given us insight into how these deer species behave, interact, and differ from one another.

We have concluded that there are 43 different deer species in the world and each one is unique in its own way.  There are some places on our planet where deer populations are declining, which means that we need to take measures to ensure that this animal and all of its subspecies are protected, as deer play a vital role in facilitating the health of their ecosystem.

With that being said, there are other places in the world such as various parts of North America where some deer species are actually overpopulated, which can be problematic for a local ecosystem.  This generally occurs when the predator of the area (usually wolves) has been eradicated and the deer are left to multiply and eat comfortably - due to a lack of fear of being attacked.  Deer species in these areas are likely to weigh a bit more than those that live in balanced ecosystems.  Let’s dive into the different deer species and their weight.

The White-tailed deer is perhaps the most common deer found in the world.  This deer species reside in North America, Central America, and even South America.  They can easily be identified by their slim and elegant build, as well as their signature white tails.

If you live out in the countryside or have ever taken a road trip across the United States, you will likely have seen plenty of these critters running around.  They are adorable, timid, and will usually try to keep their distance from most humans that come in proximity with them.  With that being said, sometimes the White-tailed deer can get a little too close to humans, which generally results in an unpleasant situation for the deer and sometimes even the human.

One of the most common things to run in front of your car when you are driving at night is a White-tailed deer, which is why they are among the top animals in the United States that are subject to being roadkill.  Unfortunately, due to their relatively large size, this sort of encounter can be quite dangerous for everyone involved in the accited - not just the deer.

If there is one deer species that is adored by the world it is the Reindeer.  This majestic creature is considered to be an icon of American culture - with it being a classic and essential part of Christmas.

The Reindeer, however, is quite different from your average White-tailed deer.  This species has a significantly thicker coat, which is why it tends to reside in locations that are more suitable for its preferred climate.  You can find Reindeer in northern parts of North America, Europe, and Siberia.

They are found in areas that are generally Tundras - where they are either living in the wild or even domesticated by people.  In these places, the Reindeer that we all know so well are actually referred to as Caribou.

Reindeer are considerably bigger than the White-tailed deer - with fully grown males weighing anywhere from 350 lbs to 400 lbs.  However, females weigh a lot less at 175 lbs to 260 lbs.

If you have ever been to some national parks that are in the northern regions of the United States and Canada, then there is a good chance that you may have run into some elk - or maybe even an entire herd of them.

However, there are some different variations of elk species - with some residing in Central Asia.  Most Elk species around the world have relatively similar characteristics and weight.

You can expect an average fully grown male Elk to weigh as much as 700 lbs to 730 lbs (with their antlers), which makes them one of the largest deer species on the planet.  Whereas a female deer species is quite smaller with a weight of 480 lbs to 530 lbs.

If there is one deer species that you will have a hard time recognizing it is the Pudu.  This furry little creature resembles a rodent much more than it does your average deer and it can be found in parts of South America.

The Pudu is an adorable deer species and is known for being shy, evasive, and undeniably cute.  They have much shorter legs than most other deer species, which is why they tend to avoid contact with humans and predators at all costs.

This South American deer species is one of the smallest in the world.  There are two different variations to this animal, the Northern Pudu and the Southern, but you can expect both of them to weigh about the same.

The Moose is perhaps the most legendary deer species in the world.  They are found in various parts of North America and are becoming quite rare to see due to a decline in their population, which is caused by disease, climate change, and other environmental factors.

This fascinating deer species is relatively relaxed, but you may not want to cross paths with this animal in the wild (or at least get too close to it), as they are the largest deer species out there.  In fact, some regions have cited that there are actually more moose related injuries and encounters than there are with bears.

Their massive antlers are iconic and add a beautiful quality to their aesthetic.  However, the Bull-moose will shed its antlers on an annual basis.  This huge deer species can weigh anywhere from 800 lbs to 1,330 lbs for fully grown males, which is far more than any other deer in the world.  You can expect a female moose to weigh slightly less at 600 lbs to 890 lbs.

While the moose is without question the largest and heaviest deer left on the planet, there was once a deer species that weighed even more.  The Irish Elk could weigh as much as 1,500 lbs, but it is now extinct due to the overwhelmingly large size of its antlers.

How Much Does a Deer Weigh?