How Much Does a Dollar Weigh? 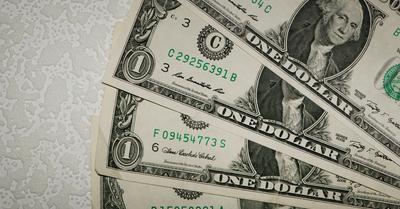 ‍Whether you are a currency collector, a bank teller, or just happen to be curious, you’ve probably wondered just how much does a dollar weigh?

A United States dollar bill weighs exactly .03 oz (1 gram). However, there are also dollar coins that are either still in circulation or have been in recent history, which can range in weight depending on the materials they are made out of.

The dollar bill’s worth over the years has had its ups and downs, but its weight has stayed pretty consistent for decades. That’s because the classic green dollar bill that we all know so well has been in circulation since 1963 - with virtually no changes being made to it - including its weight. It’s important to note, however, that while all legal dollar bills and coins hold the same financial value, they can greatly vary in their size and weight depending on the year they were made, as well as the material they were made with. To understand this further, we are going to break down the most iconic dollars that have been in circulation within the United States.

As a professional numismatist and passionate coin/currency collector, I have had extensive firsthand experience studying and analyzing the history of the dollar. During this process, I have personally weighed and calculated the metrics of all the notable legal dollars that have been used in the United States.

It’s interesting to reflect on how much the dollar’s value has changed within our lives but how its physical properties have stayed the same. The most classic dollar in use is the one that we all easily recognize as the crisp, green, paper bill that seems to become less valuable by the day. As inflation rises, we begin to see things we once bought costing double or even triple the price, but at the end of the day, the worth of the dollar is not measured by its weight, but by the value that we place on it.

While this dollar does feel like it is made out of paper, most people are surprised to find out that it is actually made from cotton and linen. The reason your dollar bills tend to stay smooth for longer periods than your average piece of paper is due to the distribution of 75% cotton and 25% linen per bill. This creative material ensures that our dollar bills are going to last for decades and will still stay intact.

With that being said, the dollars within the United States that have seen quite a changeup over the years are our dollar coins. We have had well over a dozen different dollar coins in circulation over the last 200 years. While these coins were all legally made and approved here in the United States, there are some that have been taken out of circulation and are now merely treasured for their historic value by private collectors and museums.

These days there are still a few different dollar coins that you can find around. However, due to the transition to digital paying systems and coins becoming less popular, they are much more difficult to find. When you do come across these dollar coins, you will find that they vary in their material, characteristics, and weight. Let’s take a closer look at the different U.S. dollars.

While a single dollar bill may not be worth all that much these days, if you were to combine the total of how many of them are still circulating, you would have billions of dollars in front of you., as it is estimated that there are over 11 billion of them still floating around.

These dollar bills do not stay in one place and tend to travel extensively. It is estimated that just a single dollar bill will go through more than 50 different handlers in just one year, which means that if a dollar has been circulating for decades it has likely been used thousands of times.

In the past, the dollar bill had seen some changes in its aesthetic, material, and weight. However, our current dollar bill has essentially stayed the same for more than 50 years now - with our last design printing being established in 1963.

The most recent dollar coin that has been brought into circulation is the Sacagewea Dollar. This dollar coin can easily be identified by its glowing gold color and the historic American figure, Sacagewea - a Shoshone, Native American woman.

In the year 2000, this legendary Native American hero was finally recognized by the United States for her heroism when she was printed on the last ever American dollar coin. Sacagewea is honored for her guidance and bravery during the great Lewis and Clark expedition, which resulted in the United States claiming the west.

While there are no more Sacagewea dollars being produced, there are still plenty of them circulating the country and with each year passing, they become more and more of a collector’s item - with uncirculated coins being worth as much as $5. The Sacagewea dollar weighs 0.28 oz (8.1 grams).

This epic coin can easily be recognized by its weight, color, and iconic American Eagle, which is depicted on the face of the coin. The American Silver Eagle was first put into circulation in 1986 and immediately caught the eye of the public and coin collectors.

The weight of the American Silver Eagle is exactly 1 oz (approximately 31 grams) of pure troy silver. This makes the current value of this coin $24, which will continue to climb in price as the cost of silver increases. In addition, you can still find these rare dollar coins circulating to this day. So if you happen to see one and are lucky enough to get your hands on it, be sure to hold on to it, as it is worth considerably more than its face value.

The United States decided to honor another historic figure, Susan B. Anthony by making a rare dollar coin with her face and an American Eagle on the back. This dollar coin was in circulation from 1979 - 1999.

Susan B. Anthony is a pioneer of women’s rights in our nation and around the world. She was the president of the National Women’s Suffrage Association during the late 1800s and is considered to be instrumental in the developmental stages that led to the women’s right to vote.

In addition, Susan B. Anthony is credited for being a leading figure in establishing equal pay for women. Her speeches and campaigning brought awareness to women’s rights, which have not been forgotten by the American people.

The 34th President of the United States, Dwight D. Eisenhower was also honored when he was printed on the last modern dollar coin. This rare coin was in circulation just from 1971 to 1978.

During his presidency, President Dwight D. Eisenhower was a beloved leader of the United States and is considered to be an important figure during the civil rights movement by signing the Civil Rights Act.

How Much Does a Dollar Weigh?