How Much Does A Grenade Weigh? 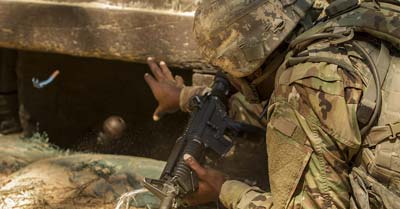 Unless you have spent time in the military, chances are you have never held a grenade. Or even seen one most likely. They aren't commonplace, you won't find them in every household, it would be quite concerning if you did! If you were curious about grenades and how much they weigh, you have come to the right place! This article will cover everything you need to know about grenades, how they work, how much they weigh, and why.

What is a grenade?

A grenade is typically an explosive charge surrounded in a safety case, with a firing pin to ensure that it doesn't go off. A grenade is most often made of an explosive called composition B. The explosives make up about half of the weight of the grenade. The case/shell, firing pin, and sometimes handle are all generally made of metal. Waterproofed, well-sealed, and generally pretty safe to handle. Grenades have safety features to ensure they don't go off at random. Grenades have come on a long way since their invention. They interestingly existed since before the Napoleonic wars in Europe, glass bottles or jars were filled with gun powder and bits of metal. Grenades only started to become commonplace during world war 1, with trench warfare leading to the invention of many new and horrifying weapons. The very first grenades used were often cans filled with gunpowder and shrapnel. Very different from modern grenades, but still very similar in principle.

How do different grenades work?

Most grenades are made up of major components. An explosive charge, a frame to contain it, a detonating mechanism, and a pin that acts as a safety. If you look at the standard M67 grenades, it looks like a ball with a handle. You squeeze the handle down, which allows you to pull out the safety pin. Once the pin is removed and the handle is released, the detonating mechanism begins. You then have a few seconds to throw the grenade before the detonator ignites the explosives. The Explosives then, surprise, explode and throw out bits of metal. Contrary to what you might have seen in movies, a grenade won't blow up a house. It will, however, do a lot of damage to the surrounding area. You don't want to be on the receiving end of one, that's for sure.

This may seem like a silly question - Why of course grenades are dangerous! Indeed, when the detonating mechanism begins they are incredibly dangerous. But, until that time, they are pretty darn safe. They can be bumped, knocked dropped, thrown, submerged in water, and even heated up to high temperatures without so much as beginning to sizzle. Unlike the original grenades, that consisted of gunpowder, modern grenades use safer far more stable explosives. A grenade is not dangerous unless you intend it to be. Soldiers would walk around with grenades on them if they were. A grenade can be thrown about 35 meters quite comfortably. It has a lethal radius of just 5 meters from the point of explosion and will cause injuries to those within 15m. The shock wave of an explosion can be felt from much further away.

How much does a grenade weigh?

As mentioned above, the standard M67 grenade weighs about 14 ounces. But, the explosives themselves only weigh about 5-7 ounces. This is the case for most grenades, the bulk of the weight is made of the shell. The shell might seem pointless, but it plays quite a big role in the effectiveness of the grenade. Sure, the explosives cause a lot of the total damage to the immediate area. But not all of it. The shell breaks up with the explosion, it is forced outwards with incredible force. The shell breaks up and is thrown outwards ripping through whatever gets in its way. That is partially why the effective radius of a grenade is about 15m when the lethal radius is just 5m. The metal will fly through the air catching people in the arms, legs, torsos, wherever. It does enough damage to put them out of action. But not enough that they die. Grenades are very effective. Gruesome, but effective.

Why do grenades weigh so much?

Most of the weight of a grenade is made up of the shell. This shell is what keeps the explosives safe from harm, its what stops them from accidentally igniting and blowing up in your hand. If grenades had lighter shells, they would be far more likely to break or misfire. Additionally, the extra weight makes it easier to throw. That might sound counterintuitive throwing something lighter should be easier. But, when you are strong enough, throwing something heavier generally gives it the momentum to keep going. Throwing a grenade across the street into the house on the other side is easier if the grenades weigh more. It also gives the grenade enough strength to make it through a window, for example.

The explosives themself weigh just under half the total weight of the grenade. Again, you could use fewer explosives but then you are going to have a less effective weapon. Grenades are designed to be as damaging as possible to a very small area. This is why they aren't bigger and heavier than they are. You don't want to completely obliterate the room that you are about to enter, just remove any hostiles from inside. Tactical grenades, such as stun grenades, are often lighter. As they use fewer explosives and don't rely on shrapnel to be effective. There are so many different types of grenades, some weigh more than the M67. Some weigh less. But, they all weigh around the same amount. The best way to gauge a grenades weight is working out whether its meant to be lethal or nonlethal. Lethal almost always weigh more.

How Much Does A Grenade Weigh?