How Much Does A Monster Truck Weigh? 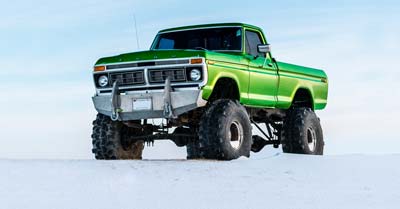 Monster trucks are awesome. They’re big. They’re loud. They do cool jumps and watching them offers you and your buddy’s a good excuse to hang out.

Monster trucks have even begun to increase in popularity abroad. They are growing in popularity drastically in both the United Kingdom and Australia. This has lead to more people wondering, how did monster trucks get started, how safe are they, and how much do they weigh? This short article answers all of the above questions and more.

‍How much does a monster truck weigh?

Monster trucks are not light. They are far from it. Monster trucks can weigh anywhere between 10,000 to 12,000 pounds. Monster trucks are designed to be “as light as possible” for the following reasons. Weight reduces maneuverability and speed drastically. A monster truck that is slow and can’t turn at all is not particularly entertaining. Especially when you consider awesome jumps and tricks is what makes monster trucks as thrilling as they are. A very heavy truck simply won’t be able to get the necessary lift to clear any kind of obstacle. Did you want to jump over a school bus? Not going to happen if you weight 20,000 pounds.

Conversely, monster trucks also need to be very strong. The frame must be heavily reinforced so the truck doesn’t fall to pieces after rougher landings. Not only would it be putting the vehicle itself at risk but the life of the driver. Driving monster trucks is dangerous. There is no beating around the bush. If you try to jump your truck 20-30 feet in the air you might not survive the landing. There are plenty of safety precautions in place, like roll cages, harnesses, padding, reinforced frames, and body armor. These all contribute to the overall weight of the monster trucks. Sure, they could be made lighter if you neglected to include these safety features. Your drivers wouldn’t last very long though.

What are the origins of monster trucks?

Monster trucks have only been around about 40 years. The first monster truck show was held in 1982 by a man named Bob Chandler. Mr. Chandler interestingly designed and drove the “monster truck” itself. He converted a standard Ford F-250 into what we would recognize today as a monster truck. These trucks have gradually gotten bigger and better over the years as the sport grew in popularity. Bob Chandler is not the only person responsible for growing monster trucks to the international, and to an extent global, sensation that it is today. Finding sponsors, venues, engineers, and most importantly other drivers were paramount to the success of the sport.

How safe are monster trucks?

Monster trucks are a lot safer then you might initially think. They do get put to the test. They get banged around, high impact crashes, rolls, and stadium shaking landings can start to take it out of them over time. But, as mentioned above, they are heavily reinforced. The metal frames both outside and inside the truck keep the body of the truck from crumpling. All of the stress is shared out equally over the frame, not the body itself. This allows the pressure from high impacts to disperse around the truck not directly through the driver. Without them, the driver would have their head rattled every time they went over a jump. It’s possible to get concussions from being on a jet ski, bouncing over all those waves rattles your brain around in your skull. Imagine how bad jumping a truck over a bus would be for your brain? This is another reason for the huge wheel suspension coils.

How can I get the opportunity to drive monster trucks?

Monster trucks, like any motor vehicle, require a driver’s license. After you have earned your license it’s time to start working towards joining a team. Whether you make your own team or join an existing one is up to you. It takes a lot of practice, dedication, and a little luck to make it into the big leagues. With a lot of hard work, you might just get there.

Hopefully, this article has answered any questions you may have had about monster trucks and how much they weigh. They are VERY heavy vehicles, a lot of heavier than you might initially think. What’s even more incredible is how heavy they are despite all the work that has gone into making them as light as possible.

How Much Does A Monster Truck Weigh?