How Much Does A Sheet Of Drywall Weigh? 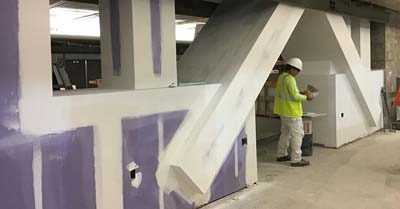 Chances are that your house has drywall in it somewhere. Almost everyone does. It has become such a staple part of everyone’s home yet most people aren’t even entirely sure what is. After all, today’s younger generations don’t do as much handiwork around the house.

It’s good that people can afford to have someone else handle construction and repair around the home. It saves them time, creates more jobs, and the work itself is likely to be of a much higher quality.

If you have decided you would like to learn how to put up drywall, or perhaps you are just double checking some of its specifics, you are in the right place. This article not only covers how much drywall weighs but any other questions you might have about it.

How much does drywall weigh?

Drywall comes in a few different thicknesses. Each has a specific purpose and, of course, a unique weight. For the most part, though you will likely use half-inch drywall. This is the bread and butter of the drywall world. This standard half-inch drywall weighs about 1.6 pounds per square feet. This means that a standard full sheet of drywall will weigh about 51.2 pounds. This may not sound like a lot, but it will slowly add up over time. Ensuring you factor in the weight of the drywall when you are doing your construction work is very important, as the next section will explain.

Why might you need to know how much drywall weighs?

The biggest reason you might need to know how much drywall weighs is when you are assessing how strong a wall will be. Drywall is pretty sturdy, it wouldn’t be used so widely in construction if that weren’t the case.

That being said, it does have its limitations. Drywall doesn’t have the strength to hold very much up. It is not meant to be load-bearing. Both structurally and decoratively.

For example, if you were planning on hammering in some nails to hang picture frames from you might want to consider how large and how heavy those pictures are. Will you be able to hang a mirror? Perhaps if it is a small one. One thing is for certain, it is a good idea to ensure you DO NOT hang your wall-mounted television off drywall. You might lose the whole wall, you certainly will lose the tv.

What is drywall made of?

Drywall is made of something called calcium sulfate dihydrate. This also goes by the name gypsum. More commonly though, it is known as plasterboard or sheetrock. It is so cheap and easy to produce that it is used in almost every single new build. More expensive houses may elect to use bricks for all of their walls instead. This will be very costly for very little added benefit. Drywall is sturdy enough for interior non-load-bearing walls so there isn’t anything to worry about. Bricks can cost as much as $1 per brick. Drywall can cost as little as $1.50 per square foot. The difference is staggering.

What are some common problems people run into when putting up drywall?

Drywall cracks, quite easily. This isn’t so much of a problem once the wall is up. Once it is up it isn’t going to be under any intense stress or pressure. Beforehand is a different story. While transporting or installing the drywall even minor bumps and scrapes can render the entire sheet useless. This isn’t too much of a problem, at a buck fifty per square foot you aren’t exactly breaking the bank with your losses. Once the drywall is up you need to consider that it can be easily broken. If you were to elbow drywall semi-hard you would puncture it. This, of course, isn’t a problem when using bricks. Drywall is also pretty prone to termites. They can eat right through it very easily. They cant eat bricks quite as easily.

Hopefully, you have now had any of your questions about drywall answered. Drywall weighs about 1.6 pounds and costs $1.50 per square foot making it both light and affordable. There is no question as to why it has become so universally popular in the construction world.

How Much Does A Sheet Of Drywall Weigh?