How Much Does an Alligator Weigh? 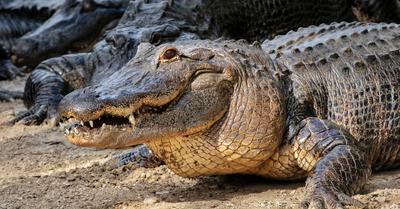 If you are not yet familiar with Alligators, you should know that they are incredibly fascinating apex predators, but how much do they weigh?

There are 2 different types of Alligator species and they tend to weigh considerably different from one another and will fluctuate in weight over the course of their lives. The American Alligator weighs about 790 lbs or more and the Chinese Alligator weighs around 75 to 100 lbs.

Alligators are a prehistoric species and are technically dinosaurs! This incredible animal has survived on this planet for more than 230 million years and has not changed its behavior much in that time, as they still hunt in the same type of environments that they did during the period that dinosaurs roamed this Earth. With that being said, while Alligators can still get pretty big today, their size and weight have changed since their ancestor was on the hunt. However, you probably still don’t want to test your luck by getting too close to one of these intimidating predators. Let’s explore the weight of an Alligator further by taking a closer look at this species.

Animals such as Alligators are protected by various government legislation within the United States and around the world. This species is also protected by numerous wildlife and conservation organizations, which aim to rehabilitate Alligator populations and prevent the poaching and unwarranted killings of this animal.

Alligators can be an intimidating species and rightfully so, as they are at the top of their food chain and are as dangerous as they are cunning. This predator waits patiently for its prey and strikes when it is most strategic - catching their food completely off guard. They are also highly intelligent animals and have even been known to use tools.

We often hear of a lot of media coverage of sharks as being a very dangerous animal in our society but in actuality, Alligators have attacked humans considerably more than sharks ever have - with currently 376 Alligator attacks having been reported in the United States alone. This is one animal that you do not want to go swimming with.

A common mistake most people make when they see this animal is that they confuse it for the Crocodile. While they do look very similar, or even identical in many cases, they are different from one another, and luckily for us, the Alligator is much less dangerous.

Alligators can bring harm to humans but they are typically not as aggressive as Crocodiles. If you do happen to cross paths with an Alligator, it would be best if it was on land, as these powerful creatures have just a bit less might out of the water given their stubby feet. Here are the different types of Alligators with their weight.

The United States is home to one of the only Alligator species on the planet, the American Alligator. This apex predator can be found in the southeastern part of the country and is a notorious animal for the state of Florida, which is where they are most commonly seen in the wild. However, the American Alligator is no stranger to the state of Louisiana where they can be spotted floating around the swamps and marshes.

You will find that the weight of an Alligator greatly fluctuates depending on its age, which can get up to 50 years old, and its gender. When an Alligator is first born it is called a hatchling. This is a baby Alligator and they are tiny, which is the only time of their life that you could ever refer to this ferocious species as being cute. During this first stage of their life, a hatchling will weigh just a couple of ounces.

However, as the American Alligator gets into full development, their weight shockingly increases. On average you will find that most American Alligators will weigh about 790 lbs or so, but some of the larger ones can weigh even more! Fully grown American Alligators can be seen that weigh 1,000lbs. These colossal beasts are rare but not unheard of.

It is very common for female Alligators to be quite smaller in size and weight than their male counterparts. A female American Alligator will weigh roughly 201 lbs and will have roughly the same weight when a hatchling as a male.

Unfortunately, the Chinese Alligator population is on the decline, as this species has been placed on the critically endangered list of animals - given that there are estimated to only be 10,000 or so of them left in existence. A major reason for this is due to the level of pollution within the river that it depends on for food and shelter.

The Chinese Alligator is considerably smaller than the American Alligator and has some different qualities as well. This Alligator species will normally weigh in at just 75 - 100 lbs for a fully grown male. And you can expect a female to be even less than that at about 50 - 70 lbs.

You may be less intimidated by the Chinese Crocodile given that it is much smaller than an American Crocodile, but you should still tread lightly when in their company, as this Alligator can still bite. The Chinese Alligator does not have a reputation for being overly aggressive towards humans, however, as they generally only attack if they feel threatened. So, watch where you are stepping and swimming when in China!

How Much Does an Alligator Weigh?