How Much Does an Ambulance Weigh? 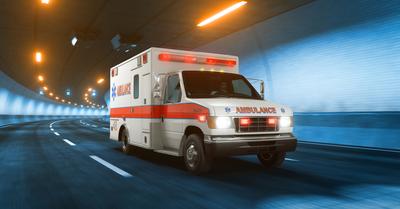 These days, we see a variety of different types of ambulances driving around, but how much does one weigh?

Ambulances driven within the United States are categorized as Type 1, Type 2, Type 3, and Type 4 and they all have different weights and characteristics. A Type 1 ambulance will weigh roughly 10,000 lbs, Type 2 weighs 9,500 lbs, Type 3 weighs 10,000, and Type 4 varies depending on its style.

An ambulance is a medical emergency vehicle that has either been custom-made and tailored to the specifications of a hospital or has been converted from a regular vehicle. If an ambulance has been converted, it is usually to save on the costs of making a custom design, as this approach requires a larger investment. However, well-funded hospitals will typically do a custom design for their ambulances, as these are more versatile and can benefit the functionality of the hospital better. Let’s explore the weight of an ambulance further by analyzing the different types that are used.

You will find that when you see ambulances driving around your town or city that some of them can look quite different from one another. Traditionally, ambulances had a standardized look and feel during the 20th century, but as medical technology advanced, we saw our ambulances get a makeover.

The primary reason this was done was to give ambulances more versatility when treating and transporting patients. By having this sort of dynamic approach to ambulance care and treatment, emergency responders are able to choose a mode of transport that is more suited for certain environments and situations better than others.

For example, if an ambulance needs to drive through a busy downtown area, such as in New York City, the idea of driving a huge ambulance through the street could be extremely impractical and can interfere with paramedics doing their job, which can ultimately put their patient at risk. This is why some ambulances are designed to be significantly smaller in size and weight to accommodate these sorts of situations.

With that being said, smaller ambulances may also have less equipment with them for emergency transport, which could be a problem for treating certain patients. If an emergency requires an extensive amount of medical supplies and equipment, it will make more logical sense to send out a larger ambulance that would be capable of treating the patient at hand. To understand the weight of different ambulances, we are going to take you through each type.

A Type 1 ambulance is perhaps one of the most common ambulances that you will see driving around. These ambulances are medium-sized and can be identified by their shape and style.

A Type 1 ambulance will have a front end, which looks just like a large pick-up truck that has a square medical box compartment attached to it.

These ambulances can be used for a wide variety of medical situations but you will find that the majority of Type 1 ambulances are closer to industrial sites, airports, and large public or private events that may require emergency medical services.

You can expect a Type 1 ambulance to weigh approximately 10,000 lbs. These ambulances are designed to be ready for a lot of different medical procedures, which is why they are stocked very well and have advanced equipment ready to go.

The Type 2 ambulance is definitely the more sporty option, as these are a little bit smaller and can prove to be more dynamic for some medical situations. A Type 2 ambulance is essentially a van that has been modified and converted into a medical vehicle.

When you see a Type 2 ambulance driving around, you will be able to spot it by its van shape, which will most likely have a roof that has been raised for better comfort and accessibility. These vans are great for zipping around busy cities that are prone to traffic jams, as the dimensions of the van make it easier to get around other vehicles and obstacles.

While the Type 2 ambulance is considerably better for speedy transport, they may be limited with supplies. Given that the size of the Type 2 ambulance is smaller than a Type 1, you can expect there to be less equipment inside. This type of ambulance is much more commonly used for emergency situations that do not require urgent and immediate care for patients that are in critical condition.

This is the ambulance that you see used by EMTs in the industry. A Type 2 ambulance usually weighs about 9,500 lbs.

The main difference between the two is how the ambulance box is mounted onto the actual vehicle. In addition, a Type 3 ambulance is usually used for a very similar type of purpose as a Type 1, which would be for events, airports, and industries.

With that being said, the weight of a Type 3 ambulance will be about 10, 000 pounds.

A Type 4 ambulance is a rather unconventional mode of emergency transport, as this variation is not what you normally associate with the types of ambulances you see driving around town.

These ambulances are emergency vehicles that have been designed for specific purposes that are outside of the norm of normal ambulance use. A Type 4 ambulance will come in many shapes and sizes, but the most common version of this would be an ambulance in the form of a golf cart.

While you probably won’t be doing any extensive medical procedures while transporting a patient in a Type 4 ambulance golf cart, you are providing speedy and efficient service in getting the individual to a proper treatment facility. That is why a Type 4 ambulance is referred to as a first responder vehicle.

You can expect to see Type 4 ambulances in places where there is a lot of human foot traffic, which is likely condensed such as within airports and at events. These golf cart ambulances are perfect for giving medical professionals access to places that a normal ambulance would not be able to get into.

The weight of a Type 4 ambulance can fluctuate, but you can expect the most common type to be roughly 1,000 lbs.

How Much Does an Ambulance Weigh?