How Much Does an Ant Weigh? 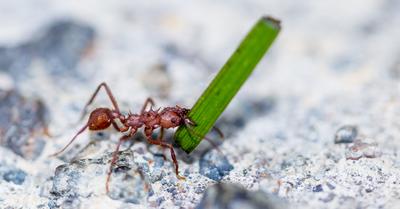 For most people, ants are either pesky household pests that go after our favorite foods or are fascinating insects to marvel over, but how much does one weigh?

The most common ants most of us see weigh approximately 5 to 10 milligrams. However, there are over 10,000 species of ants on this planet and their weight and characteristics can greatly range. Ultimately, ants can weigh anywhere from 1 to 150 milligrams.

Whether you love them or hate them, ants are a very interesting species that have a lot of different characteristics and capabilities. Yet the overall function of ant seems to be the same - to serve its queen. These loyal and determined insects are found in almost every single corner of the planet. Their resilience and focus on their task makes them incredible foot soldiers that are willing to die for their cause, which is why we better hope that they don’t get any bigger because ants are the ultimate bodybuilders of the insect world- with some able to lift 20 times their own weight! To understand more about ants and their weight, we are going to take a closer look at the different ant species of our planet and compare their different weights.

Ant species around the world are studied by various myrmecologists. These myrmecologists are professionals that have dedicated their study specifically to the study of ants by evaluating their qualities and specifications.

As we mentioned earlier, ants are such a common species around the entire planet with over 10,000 different types that span the globe. While we commonly associate ants as being one and the same due to their small size and similar features, this species is actually more dynamic than what meets the eye.

The reason for this is that in the western world we tend to have a smaller range of ant species that we identify due to most of the ants that we come into contact with being the average household ant that we all grew up with, which either make their way into our sweets or get fried in our backyards by a magnifying glass.

While the ants that most of us see are pretty hard to differentiate from one another, there are some around the world that are much more peculiar in certain parts of the world and can actually be quite dangerous, big, and heavy by comparison to the ones we are used to. Here are some of the different types of ants with their weight.

A Carpenter Ant is a relatively common ant, but you will find that they are not likely to be found inside your home or anywhere near it unless you live out in nature.

The reason for this is that the Carpenter Ant is a woodland ant that is found primarily in forested areas. These black-colored ants bury themselves inside damp woods and logs, which is where they build their nests.

These ants fluctuate in weight depending on what stage of their life they are in. The Carpenter Ant will weigh just 1 milligram early in life and will get up to 5 milligrams towards the end of its life.

If there is one ant you do not want to crawl into your shorts it is the infamous Fire Ant. This pesky ant species tends to have a bad reputation among most that have crossed its path, as they have likely experienced a fiery sting.

Fire Ants span the globe and they all seem to have a similar approach to humans - sting on sight! These ants are orange or red in color, which is why they have rightfully earned their name.

With that being said, Fire Ant species can vary in some of their qualities -especially their weight. Some Fire Ants located outside of western countries have been reported to be significantly larger and even more dangerous, which is why you want to avoid them when they are in large numbers.

One of the most common ant species that exists in the world is the Black Garden Ant, which can be found all over Europe, Asia, and most of North America.

These ants generally don’t have any bad intentions to humans and merely want to soldier on and serve their queen. However, don’t be surprised if they make their way into your picnic basket when you are not paying attention.

These ants actually benefit the environment in many ways by breaking down organic materials and controlling the populations of other bugs - hopefully, some that are more threatening!

With that being said, Black Garden Ants are tiny and only weigh about 0.6 to 0.85 milligrams. However, their queen can be significantly larger and heavier with a weight that can be as much as 10 milligrams, which is more than 10 times the average Black Garden Ant.

The Tapinoma Sessile is the classic ant that we see all over the United States and North America. They also go by the name Pavement Ant, which is one of the most common places that you will find them - crawling around on your sidewalk.

While the Tapinoma Sessile generally stays outside, I am sure you have been the victim of ant invasion or two over the years in your home. These crafty insects always find a way to get what they want, so it is best not to give them any opportunities. Don’t leave out food and sweets!

The Tapinoma Sessile is a tiny ant species and will just 0.3 milligrams in its early life and will get up to 0.9 milligrams later on.

If there is one ant species you do not want to cross paths with it is the Bullet Ant. This ferocious insect can be found throughout some of the tropical areas of Central and South America and it is said that the Bullet Ant has the most painful sting in the entire world.

The Bullet Ant’s sting makes the Fire Ant look like nothing, which is why we should be thankful that they are located far away from us. People that have experienced a sting from the bullet and describe the feeling as having burning hot charcoal pressed into their skin.

In addition to the Bullet Ant being an incredibly intimidating ant because of their sting, their size will also make your skin crawl, as Bullet Ants are one of the largest ant species in the world. They can get up to just under 2 inches in length and will weigh about 60 milligrams. This is one ant you do not want to mess with, as you may need more than a magnifying glass to get past them.

Finally, the Dinomyrmex Gigas, which is considered to be the largest ant in the entire world! This giant insect can be found in the jungles of southeast asia and prefers to live in humid conditions.

The Dinomyrmex Gigas is commonly referred to as the Giant Forest Ant, which it rightfully deserves. This ant species will weigh about 135 milligrams but there have been instances where it has gotten up to 150 milligrams.

While this ant species is not nearly as threatening as the Bullet Ant, it may still make you wary when you see one crawling around the jungle.

How Much Does an Ant Weigh?