How Much Does an Apple Weigh? 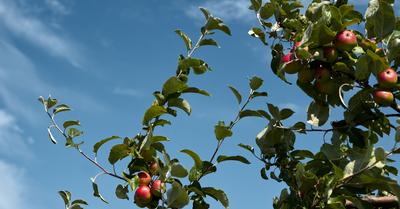 Whether you are calorie counting for your diet or are simply a curious shopper who loves apples, you’ve probably wondered just how much does an apple weigh?

Apples can greatly vary in their weight depending on the type of apple, its size, and whether it has been sliced, deseeded, and had its core removed.  However, you will find that the average weight for an apple will vary from 0.35 to 0.4 pounds.

As the saying goes, ‘having an apple a day keeps the doctor away’.  In the United States, apples are one of the most common fruits that we see at the supermarket, which is why it is one of America’s favorite fruits.  This classic food item is ingrained in our culture and is as delicious as it is nutritious.  However, the idea of a standard apple has become an idea of the past, as farmers have crossbred enough apples over the years for us to have dozens to choose from.  They range in flavor, color, and weight.  To understand the weight of an apple better, let’s take a closer look at some of the different apples available to us and their weight proportions.

Apples in the United States are cross-bred by farmers and scientists to create new variations of Genetically Modified fruit.  An apple must be approved by the United States Food & Drug Administration before it can be legally sold and purchased.

These days, when you go to the supermarket you can find so many new varieties of apples at the store.  It is amazing to think that geneticists and farmers are still finding ways to cross-breed this traditional fruit into new variations.

As our apples get genetically modified, they are often designed with a specific purpose.  These purposes can range depending on the type of apples that are being cross-bred together, as some apples have favorable traits that can be combined with other sortations to improve their quality and their flavor.  Some of these modifications include preventing browning, bringing out color, and adding longevity.

With that being said, these genetic modifications also change the size and weight of an apple.  This has given the traditional apples we have grown up with a twist, as it can be harder to pinpoint a generalized weight for all apples across the board.  Let’s dive into some common apples and their weight.

As the name implies the Fuji Apple originates from Japan and was first brought into creation during the 1930s.  This apple is crisp, sweet, and delicious and has become one of the most popular variations of apples around the entire globe.

The Fuji Apple got a major boost in international appeal when it became very popular in the United States during the 80s.  Since its popularity, the Fuji Apple has become an American standard and can be found in grocery stores across the entire nation.

While most Fuji Apples come in a ballpark range as far as weight, the average you can expect to see in most stores would range from 0.65 pounds to as much as 0.90 pounds.

One of the most common apples you see in most stores is the Honeycrisp variation.  This delicious apple is crisp, sweet, and tart in flavor.

This apple variation first came onto the scene during the 1960s and gained immediate popularity in the United States and much of the world.  The Honeycrisp originally came from Minnesota.

With that being said, the size and weight of a Honeycrisp Apple can vary greatly, as this variation can come in an assortment of different sizes.

Geneticists often create a variation in the size and weight of Honeycrisp apples to accommodate the preferences of different consumers, as some prefer to have a range of selections to choose from when shopping.

The Red Delicious Apple truly lives up to its name as it is just that - red and delicious!

This apple variation may be among the most classic apple types in all of the United States, as it has been around for over a century.  The Red Delicious Apple originated in Iowa during the 1870s and was an immediate hit across the country.

The Red Delicious Apple is still quite popular to this day and can be seen everywhere from our supermarkets to our public schools.

The typical weight of a Red Delicious Apple will be roughly 0.4 pounds.  However, the weight of this variation can fluctuate from 0.3 pounds to 0.5 pounds.

A newer contender on the scene is the Gala Apple.  This variation has gained extreme popularity in recent years and has actually replaced the Red Delicious Apple as the number one favorite within the United States.

The Gala Apple originated in New Zealand during the 1930s and has slowly made its way to America.  The flavor of this amazing fruit is sweet yet at the same time subtle - making it a very balanced apple variation.

The Gala Apple is relatively small in size and generally weighs only 0.25 pounds on average.  However, you can find weight variations for the Gala Apple that can range from 0.2 pounds to 0.32 pounds.

Another all-time classic variation we all grew up with is the Granny Smith Apple.  This iconic apple is known for its bright green color and its sour and acidic flavor.  This is the crowd-favorite apple for caramel apples.

The Granny Smith Apple originated in Australia during the 1860s and gained popularity in the United States and Europe immediately.

Here are the most common weight variations you can expect for a Granny Smith Apple:

Granny Smith Apples have been crossbred so many times over the years that their weight fluctuates a lot depending on who produced the apple.

The classic Golden Delicious Apple is another American favorite and is one of the iconic apples of our nation.  Its rich golden color catches the eye of shoppers to this day and it has a sweet and savory flavor.

You can expect the weight of the Golden Delicious Apple to fluctuate as well.

Much like other classic American apples, the Golden Delicious Apple has been crossbred many times to give people variation.

The McIntosh Red Apple originally came from Canada and has become one of the most popular apple varieties around the United States.

The average weight of a McIntosh Red Apple will fluctuate between 0.35 and 0.45 pounds.  However, this apple variation can sometimes be crossbred by farmers to have a weight that fluctuates.

How Much Does an Apple Weigh?