How Much Does An Empty Propane Tank Weigh? 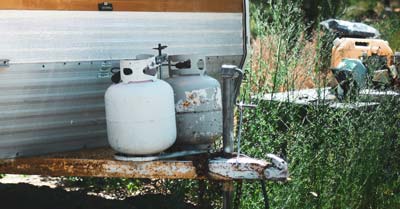 Chances are you have seen propane tanks all over the place. Far more than you likely noticed. Propane is used in all walks of life and is pretty easy to buy. It is so common in fact that if you have ever had a BBQ, odds are you have used a tank. Or at least eaten the food that was cooked with one.

Propane tanks come in all shapes and sizes, so working out how much an empty tank weighs is quite difficult. That being said, propane tanks are usually about 17 pounds when empty, and about 20 pounds when full. Of course, half-used tanks will weigh less. Part of the reason it is so hard to tell if a tank is full, just by picking it up, is that they are so similar in weight. This can be quite dangerous, as a full tank is highly explosive. And an empty tank is, well, not.

This article will cover everything you need to know about propane tanks, propane, and how to keep yourself safe around it.

What material are propane tanks made of?

Most LPG (liquified petroleum gas) tanks are made of stainless steel or aluminum. It varies from company to company. LPG tanks must be strong, airtight, and resistant to extreme pressures and temperatures. The tanks must be able to be thrown around, dropped, stepped on, kicked, have stuff dropped on them, and be resistant to high heats and very low temperatures without losing their integrity. It is a matter of safety above all else. Imagine if LPG tanks exploded whenever the semi that was transporting them went over a bump in the road? The Highway would like to look like a minefield in just a matter of weeks. As mentioned just above, tanks can be made of steel or aluminum (as well as some other alloys). This difference in the material can also affect weight and strength. Aluminum, for example, is much lighter than steel, but not quite as strong. Steel weighs significantly more but is also far more durable. This is not to say aluminum isn't also strong, it just isn't quite AS strong.

Why are empty tanks and heavy tanks so similar in weight?

The minimal difference surprises many people. How can a full tank only weight just a couple of pounds more than an empty one? That's almost a negligible difference. The reason is, that propane is a gas. Unlike the gas that we put in the car (which is liquid), propane is genuinely a gas. It is in its gaseous form, which is then compressed and sealed in the tank. Propane can be found in liquid form, interestingly propane is often pressurized into its liquid form when transported. As it is far less flammable and more can fit in each container. The gas expands to fill the volume of its container, a liquid does not. Since it is gas, it makes it easy to use for us when we buy a tank and bring it home. Liquid generators are more complex and dangerous. Propane tanks can be fitter to the BBQ by a child. It shouldn't be, of course. But it truly is that simple.

Propane is dangerous. It is toxic when inhaled, or drank if you somehow have it in liquid form. It can burn the skin and can blind you if it goes in your eyes. Luckily, it should never be anywhere near your eyes. Its biggest risk factor comes from the sole reason we use it. It is highly flammable. It ignites easily and burns for a long time. This is what makes it such a good fuel source. As mentioned above, propane comes in steel or aluminum airtight and pressurized LPG canisters or tanks. They are what keep you safe, as they are resistant to pretty much anything you can throw at them. That being said, you should still treat them carefully. Keep them away from potential fire hazards, don't throw them, and avoid driving with them inside your car. Strap them to the back or roof if you can. If you happened to get into a car crash with a propane tank in the passenger seat. Well, let us just say I would hate to be the first responder that arrived at the scene.

What is propane used for?

Propane is used for combustion. It is a fuel source. Most commonly it is hooked up to a BBQ where it slowly releases the gas over a flame. The gas ignites and the food can be cooked. When you're done, you turn the flow of the gas off and the flame will go out. Easy. Propane is also used to fuel generators. These could be to power your heating system in your house, your hot water tank, or just a backup generator. A propane tank will last for quite a while, so it makes a good safety net. If the power goes out on a cold winters night, your propane generator will feel like a godsend. Propane should be stored outside the house, or at the very least in the garage. It may be pretty safe, the risk may be minimal, but there are risks.

What to do if there is a propane leak?

Propane gas smells, quite strongly, the gas itself is interestingly odorless. They put the smell in there so you will notice it as soon as there is a leak. If you do think you can smell gas, the first thing to do is shut off any source of ignition. If you are using it to cook, turn the dials right down so there is no flow. Then quickly seal the valve on top of the tank. This should be the end of your problems. Disconnect the tank and then see if you can seek out where the leak was coming from. If the tank ignites, because of the leak, then you have a few seconds before it blows up. And it will blow up. The best advice is to run, quickly. If you are feeling brave you could pick it up and throw it as far away as possible. But it will certainly blow up, on impact. Your best bet is to run.

How Much Does An Empty Propane Tank Weigh?