What’s The Difference Between Ants and Termites? 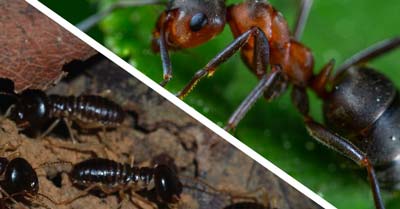 Ants and termites may be tiny pests but their impacts on your home can be quite serious. The difference between the two is a big deal if you’re going to successfully prevent them from damaging your home.

As homeowners, we all know how important it is to keep our beloved homes safe. While ants and termites are tiny pests, they can cause serious damage to your property and you definitely do not want them in your home. Unfortunately, many homeowners find it quite difficult to tell the differences between these pesky critters because they have some common behavioral and physical attributes. But because figuring out exactly which insects you are dealing with is integral in developing an effective pest control plan, knowing the difference between ants and termites is of great importance.

Although ants and termites have a lot in common, you can pretty easily tell the difference between them if you know what to look for. Unlike termites that have two pairs of equal wings, ants have two pairs of wings but the front wings are larger than back wings. While termites have straight antennae and thick waist area, ants have elbowed antennae and thin waist area. In addition to their body differences, these pests hide in different places and can cause different types of damage.

In this article, we want to help you learn a thing or two about the main differences between ants and termites. By knowing the difference between the two, it will be easier to deal with them in case they invade your home. We hope that ants or termites will never invade your home and you’ll never have to use this information. But just in case, let’s look at some of the differences between ants and termites.

To make it clearer, let’s start by taking a distinctive look at the two before embarking on their differences.

What is an Ant?

You were perhaps unfortunate enough to be stung by a fire ant as a kid, but do you know exactly what an ant is? Ants are small insects that have a head, thorax, abdomen and six legs. They’re social insects that live in colonies and divide their workloads. For instance, the ant that you usually see roaming around collecting water and food are worker ants who are protected by soldiers.

Ants often travel far and wide in search of water and food. They’re usually known to have a strong sweet tooth. That’s why they are particularly attracted to items such as sugar, fruit, and honey. Even though they can communicate with each other through their antennae, they often lay down pheromone scents to attract other ants to a food source.

This may come as a surprise to you, but ants are very structured insects that operate in different castes. Each caste knows its role within the colony as highlighted below.

There are several different types of household ants. Here are the most common ones.

Are Ants Dangerous and How Destructive are they?

While Pharaoh ants can transmit disease bacteria, this is very rare. The biggest threat, however, comes from fire ants sting, which poses danger to many homeowners. Nonetheless, ants are generally harmless.

Although ants may not cause much damage (if any at all) to your home, they can still weaken your wooden structures and can loosen the soil around your home over a substantial amount of time. As a homeowner, it’s advisable wary particularly about carpenter ants as they can cause serious structural damage and home destruction.

Like ants, termites are six-legged insects with a head, thorax, and abdomen. They vary in sizes and can range from tiny to large. Like ants, termites have a caste system that is pretty much similar to the ant caste. Termites can cause serious damage to your home as they don’t just live in the wood but also consume it. They can live in the soil while building tunnels to access the woods within your home.

There are several species of termites, but here are the most common ones.

Are Termites Dangerous and How Destructive are they?

While termites can cause big holes in your wallet, they’re necessarily not going to bite you, your loved ones or pets. Nutritionally speaking, living beings offer nothing to termites so they’ll just stick to the cellulose that they obtain from wood, paper, and such products.

In terms of destruction, it’s reported that termites cause an estimated $5 billion in property damage to homes in the U.S. annually. For this reason, termites (particularly subterranean termites) can cause serious damage to your home. Subterranean termites are widely considered as the most destructive. This is because they can fester underneath your home without you having any idea that your home is infested. In other words, destruction can occur even for years without your knowledge.

So what are the Differences between Ants and Termites?

Things can get a little tricky if you do not know how to differentiate ants and termites. And because there are several ways to differentiate the two insects, let’s look at the key differences.

Waist - One of the most outstanding body features of an ant is the existence of a pedicel. This is the thin section that separates the thorax and the abdomen. In other words, you can easily see the distinct separation of their body parts. They also have thin and pointed abdomens, which give them an hourglass shape.

On the contrary, termites do not have the pedicel. Instead, they have thick and rounded abdomens, which make it quite difficult to distinguish their body section. This is why they appear straight or rectangular with nearly the same thickness from their head down to their body.

Antennae - Ants have single-jointed and elbowed (or bent) antennae. The antennae stick sideways since they’re attached to the sides of the ant’s head.

Contrarily, termites have straight but short antennae with a string of tiny beads and are pointed directly in front of them. These tiny beads give the antennae rough edges, which are somewhat difficult to notice with naked eyes unless you’re very familiar with insects.

Wings – Ants have four wings that are distinctly different in size. The front pair is larger than the back pair. Ant wings are typically the same length as the ant’s body and are shorter than termite wings. Ants often feed on their wings, so you’re unlikely to find them (wings) within your home.

Like ants, termites have four wings. However, they’re precisely the same length and shape. The wings are almost twice the size of the termite’s body. Keep in mind that you’ll know that your home is infested by termites if you find discarded silvery wings that resemble fish scales in various places such as doorway, patio or window sills.

Termites may be termed as herbivores as they tend to feed on cellulose; a nutrient-rich substance found in plants and wood. This is why they mainly feed on wood, paper or any other cellulose-rich products. Contrariwise, ants are omnivores and mainly feed on nectar, sugar, other insects, as well as various types of food debris within your home. In short, ants will feed on just about anything, but not wood (they only use this for shelter).

Termites have three life cycle stages: egg, larvae (nymph), and adult. Termites can survive for a few years while the termite queen can live for decades. In terms of the reproductive cycle, fertile termites fly out of their colonies to mate and establish new colonies. Although termites lose wings after mating, both male and female continue living together to build and expand their new colonies.

On the other hand, ants have four life cycle stages: egg, larva, pupa, and adult. While worker and soldier ants live for a couple of months, the ant queen can live for several years. Like termites, fertile winged ants fly out of their nests to mate and establish new colonies during warm months. However, the male ants typically die after the mating sessions.

Both ants and termites are social insects that live in large colonies with designated castes. Each caste has an important role to play in the colony. Ants and termites are likely to enter your home through minute openings and cracks in the foundation. They tend to hide their colonies under the floorboards or inside the walls. It’s, therefore, vital to look into such areas when eradicating ant and termite infestations.

Termites are generally found in lumber, wood debris, stumps, decaying trees, and wooden parts of any structure. You should thus look for termite colonies in such areas, as well as in bookshelves, kitchen drawers, and even in swimming pool liners. Remember, termites can cause serious structural damages since they feed on wood. They also chew on insulation and other home materials in search of the resources that they need to build a nest and safeguard the colony.

Depending on the species, ants can hide behind large appliances, in cabinets or even underneath your floor. For instance, carpenter ants naturally inhabit wooden parts of structures even though they do not feed on wood. This doesn’t, however, mean that they cannot cause serious structural damages.

Again, ants are much easier to find than termites since they don’t hide in far-flung places. Generally, ants live in nests or holes that they dig out of the ground. Such abodes are quite visible and easily noticeable. On the contrary, termites do not build such structures. So if you see mounds or piles of dirt, you’re probably dealing with ants. This because ants tend to keep their nests very clean and will dump debris in a pile far away from the nest.

Although termites and ants may look quite similar to the untrained eye, they are very different pests that can leave your home in tatters. That’s why understanding and knowing the difference between the two is a crucial step in effective and successful pest control.

If you notice signs of ants and termites in your home, the key is to take immediate action. There are several steps to eradicating these little guys from your beloved home without causing a huge dent on your finances. The first step is to know how to differentiate between the two sneaky pests.

What’s The Difference Between Ants and Termites?