Why Are Ants So Strong? 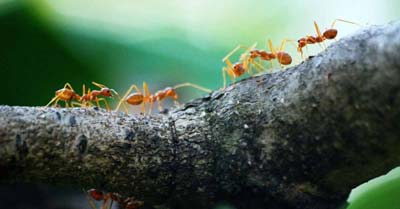 Ants are definitely the insects we most usually observe lifting heavy objects. Those objects typically weigh way more than their bodies.

The strength of those insects makes them one of the most resilient animals on the planet. That can cause a serious problem for homeowners wishing to get rid of their colonies as soon as possible.

Pest control is not always easy when we talk about ants. So, the true question remains: why are ants so strong and how can we effectively get rid of them once and for all?

What makes ants so strong?

As surprising as it may seem at first, the reason why ants are so strong is firmly associated with their small size and body surface. The surface area of those insects is typically much smaller than their volume. That actually means that the muscles of an ant don't have to expend much energy in order to carry its body around. That in turn, makes the moving or carrying around of heavy objects a relatively easy task for those little organisms. It also, means, however, that if an ant was much larger, it wouldn't be able to have the same strength.

Apart from their ability to lift weights, ants also, are able to support a high amount of static weight. Various studies have proved that the small neck of an ant can actually hold 5,000 times the ant's weight. If we really think about the meaning of those numbers in a human being, then we can easily understand the importance of that feature. Imagine a man weighing 150 pounds. If he had the same neck ability, that would mean that he would be able to hold without trouble 750,000 pounds! The whole point behind the strength of an ant is mostly physics and less biology. Scientifically speaking, the strength of any muscle is proportional to its cross-sectional area. Weight, on the other hand, is roughly proportional to volume. That explains why an ant would easily collapse under its own weight due to its thin legs, but it can lift objects that outweigh its body mass by far if need be.

Ants are among the most hard-working animals that can be found on our planet. Let's not forget that that was the reason behind the famous writer Stan Lee's creation of the popular iconic film character, named Ant-Man. Mother nature gifted them with extremely strong muscles. In fact, the abundance of muscles that cover an ant's tiny body makes it extremely strong for its weight.

Apart from the individual strength of those insects, some of their abilities lie in their teamwork attitude. When they get together and combine their muscle power, then they can do some even more impressive things! For example, in one single year, an average ant colony can move about 50 tons of soil. The team spirit of those insects also, means that they can be highly destructive when they make a large group. For this reason, pest control is a huge problem for homeowners who have had the misfortune to have some ants moving into their houses.

Other reasons behind a homeowner's difficulty to handle ants

Apart from their strength and preference to live in colons, there are some extra reasons that can make the task of exterminating ants difficult. To start with, they usually build those huge colonies in unusual spots that are not always accessible by humans. The inside of a wall or the underground floor are examples of such places. Ants can even prefer to create their colony behind your kitchen cabinetry or under the pavement just in front of your house.

What can homeowners do?

As mentioned above, the special nature of ants makes them a serious problem for many homeowners. Although they look small and innocent, an invasion of a small colony in your house can cause some serious trouble. They can quickly contaminate your food and beverages, they can spread diseases and they can even cause some allergic reactions in both humans and pets if they bite you. Since they tend to swarm, once an infestation takes place in your house, they can be really difficult to dislodge. A combination of home-made treatments should be taken into serious account to prevent further growth.

As we mentioned before, ants are extremely social creatures that prefer to work in teams. That particular trait may make them stronger and more damaging, but it can also, help homeowners to trap them and then exterminate them. How is that possible? With the placement of some ant baits in key places indoors. Most ants are prone to love sweets, while others are mostly attracted to fats and oils. If you use both carb-based and protein-based traps, in those spots of your house you have seen some previous ants activity or in those spots that are more prone to get invaded by ants, then you can probably prevent their growth by exterminating them when they are still few. Several natural treatments are available, including Borax, Diatomaceous Earth, as well as spices, including cinnamon and mint. All of those compounds are safe for humans and they are unable to cause any health issues or adverse effects to anyone except ants.

Non-repellent ant sprays, most of which can be made solely at home with the use of natural ingredients, can be another great weapon in your dealing with those strong insects effectively.

It is true that ants are among the most durable and resilient creatures on earth, nowadays. Their special body structure and tiny size, along with their extremely strong muscles enables those insects to have an impressive strength that humans could not even imagine experiencing. For this reason, as well as due to the fact that ants love to live together and create large colonies, pest control, and prevention of their colony's expansion is more difficult compared to other species. Homeowners should always try to find the best and most environmental-friendly natural solutions that can help them get rid of those irritating little creatures once and for all.

Why Are Ants So Strong?