Why Are Roaches So Hard To Get Rid Of? 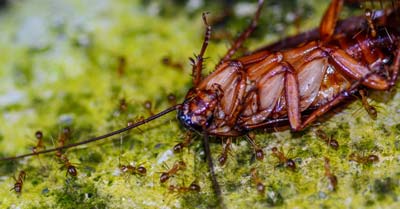 Most bugs are unwelcome pests in a home, but there is one in particular that can universally make your skin crawl—cockroaches.

Roaches are one of the most common pests in the United States. They emerge from dark places and skitter quickly across the floor or, worse yet, out of a kitchen cabinet. There is even a joke that the only thing that could survive a nuclear war is a cockroach and it certainly feels that way if you’ve had a cockroach problem. It is hard to keep them out of your home and even harder to get rid of them completely. Why is that?

To fully answer this question, let’s look at the science of cockroaches.

Cockroaches have an extremely strong exoskeleton and unique circulatory system.

Have you ever squashed a roach only to see it run away? The outer covering of a roach is extremely flexible and durable, allowing them to survive weight hundreds of times more than their own weight while also being able to fit into and escape from small crevices and spaces. Their exoskeletons are made up of a series of plates that overlap. They are connected by a stretchy membrane that is strong enough for protection, but flexible enough to squeeze into tight spots. Their spines are special and allow cockroaches to wiggle around even when their legs are splayed.

Their bodies also contain an open circulatory system with little holes in each segment of their bodies. What this means is that a roach can live without its entire body, even its head, for several days, although it would eventually die from dehydration. Even when they are fully intact, cockroaches can last for long periods of time without food and water. That is why even if you keep your house clean for a week or two, roaches can still find their way into the kitchen when you miss those crumbs under the table.

They can reproduce by parthenogenesis, which is really a fancy scientific term meaning they don’t rely on males to reproduce. A female roach can breed an entire colony of roaches without the help of a male cockroach. This can be problematic, especially when some roach killing techniques involve using hormones to lure out and get rid of male cockroaches.

In addition to being able to breed alone, the roach reproduction cycle is extremely short. Some types of cockroaches produce 48 eggs in a single egg capsule. These eggs take about 60 days to mature into adults. After that—you guessed it—the cycle starts over again. In a year, a single cockroach could have a family tree numbering in the millions!

The creepiest part about cockroaches is that they may be wandering around your home at night without you ever knowing. Typically, roaches will run away at the sight of light because it is alerting them to the possibility of a predator, the main predator being humans! This is why roaches are usually spotted when a light is turned on and they scatter to darkness for protection. They will hide during the day and wait for darkness to scavenge for food, making it close to impossible to find them unless you catch them by surprise.

Cockroaches do not have many natural predators.

There are not many animals or other insects that will go out of their way to catch and eat cockroaches. They do not have to worry about a predator hunting them down, which goes back to why they can reproduce quickly and in large numbers. Cats and dogs usually are not interested in bugs, and roaches are sly enough to evade spiders and snakes. This is typically why cockroaches need to be exterminated using chemicals—but do all chemicals work?

Look at it this way—there are more than 3,500 species of cockroaches that live on the planet. About 30 of these species have adapted to specifically live around and flourish because of humans. The German roach (which resides in America) in particular has a high tolerance against pesticides, including bait traps. They may come into contact with the poison or bait, but like legend of the Roman king who ingested small quantities of poison every day to build up resistance, the cockroach has adapted to become immune.

In fact, they can become immune to more than one type of pesticide at a time, forcing exterminators to learn new techniques for getting rid of these pests. Often, exterminators are rotating multiple pesticides every few months and utilizing gel baits to ensure that they get rid of a roach infestation. It is not as simple as it used to be, but knowing which type of cockroaches live in your neck of the woods is the first step in understanding how to get rid of them.

Lastly, cockroaches are attracted to the presence of other cockroaches.

The way they do this is one of the reasons cockroaches can be dangerous if they are crawling around your home. They communicate using their feces. Compounds are produced by the bacteria in a roach’s gut that attracts other roaches and helps them communicate. The German cockroach, as mentioned above, is one of the more typical species of cockroach. They usually live with multiple roaches, allowing the reproduction cycle to speed up, and they communicate through chemicals known as pheromones that are produced by the roach itself or through their gut. Entire families of roaches live together and continue to breed and attract other roaches, leading to infestations that are hard to control.

Cockroaches are a nuisance at best and dangerous at worst. They feed on garbage, leave waste on floors and kitchen counters, and can carry pathogens that may cause diseases. They can make asthma and allergy symptoms worse. They live in dark corners and get into food wherever they can find it.

Unfortunately, cockroaches are one of the most resilient pests in the world and are built to survive.

Why Are Roaches So Hard To Get Rid Of?