Why are Termites Attracted to Ink? 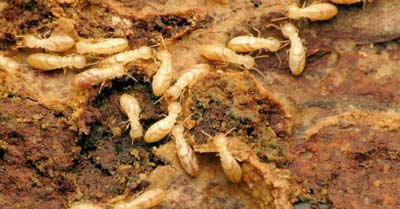 Having your home infested by termites is one of the last things any homeowner would want. Despite their tiny sizes, termites are perhaps the most destructive of any pest that can invade your home. They can bring almost any part of your home down!

As a homeowner, this is something that you wouldn’t want to befall you. That’s why you should know how to deal with them just in case you find yourself on the wrong side of a termite infestation. One of the widely accepted ways of dealing with a termite infestation is by using ink to lure them to doom. Well, this is because termites are highly attracted to ink.

But why are termites attracted to ink? Termites aren’t just attracted to water-damaged wood. They’re known to follow a trail of ink. Studies have found that blue inks that are generally used in ballpoint pens contain a glycol compound known as phenoxyethanol that mimics the type of pheromones that termites usually follow. As such, it’s possible to use blue ink to lead termites from your home and is a critical step in dealing with a termite infestation.

While we all know that termites are quite destructive, their anatomy remains a mystery to many homeowners. One of the strangest things about termites is their affinity for ink. This brief article, therefore, looks at how you can use ink to your advantage when dealing with a termite infestation in your home.

What is Termite Anatomy?

Scientifically speaking, most insects are driven by their high senses and instincts. However, termites are quite different from other insects given that their senses are very limited. Termites do not have eyes or ears so they can neither see nor hear. So are you wondering how these industrious but tedious insects get on with their daily lives? Well, they only rely on their strong sense of smell to go about their daily routine.

What is the Importance of Pheromones in Termites?

As we’ve noted above, pheromones are chemical substances that play crucial roles in the daily lives of many insects, as well as some plants. Most insects use pheromones to communicate, mark their trails, to reproduce, to defend their territories, and also to lay down laws that are used to manage their highly social life.

When it comes to termites, they produce their pheromones from the exocrine glands, located in the abdomen. And because termites are blind and deaf, pheromones are the only way to ensure that they can communicate, find food, find their way back to the nest, mate, and ensure the survival of the colony. Here is a more detailed look at how termites use pheromones.

To mark their trails

A termite will excrete pheromones when it discovers a food source. This will lead other termites from the nest to the exact location of the food by smelling and feeling the pheromones with their antennae.

Termites will excrete a special pheromone when they sense danger. This is to warn fellow termites about the impending danger so that they can flee. In short, they can use pheromones as a defensive tactic to help them stay away from danger and to enhance their survival.

To regulate the population within the colony

The queen termite can excrete a special pheromone to hinder other termites from becoming reproductive, especially when the colony is overpopulated.

To replace the queen

If the queen termite dies, the king termite can produce a special pheromone that helps in choosing the most fertile female to become queen. Weird, right?

So why are Termites Attracted to Ink?

Unbelievably, scientific studies have somehow found out that the drying agents in pen ink have a chemical compound called phenoxyethanol. This chemical has a close relation to the pheromones used by termites to navigate, communicate and find their food source. Like the termites’ pheromones, ink can lose this scent within 15 minutes. This means that the termites are likely to wander off after that, especially if they’re worker termites (soldier termites have a stronger sense of smell so will likely follow the trail of ink for longer periods).

Is it Possible to Use Blue Ink in Eradicating Termite Infestation?

The simplest answer to this question is yes. Creating a trail of ink can be an inventive way of leading termites out of your home and to their doom. In other words, you can use ink to lead termites from or to their nest and use other methods to exterminate them. This is to say that it wouldn’t be wise to rely entirely on ink to deal with a termite infestation. Instead, you can use ink as the first step in exterminating termites.

The best thing to do is to use ink as a bait to lure termites to your extermination point. You can then use various methods to ensure that they’re eradicated. You can also use ink to discover their nests or even to assess the extent of damage caused by the termites in your home.

Why are Termites Attracted to Ink?