How Much Does A Dolphin Weigh? 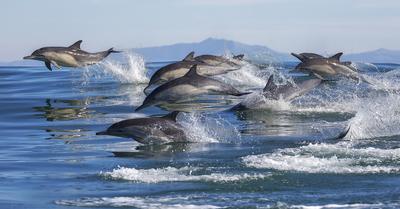 ‍Have you seen a dolphin and ever wondered how much does a dolphin weigh? There is no definitive answer to this as their weight can vary depending on their size and age.

Dolphins are amazing creatures, and many people are curious about their body weight. While there is no one answer to this question, scientists have come up with a general estimate of how much a dolphin typically weighs.

Dolphins are widely known for their playful behavior, they have great eyesight and sensitive hearing, but they don't all weigh the same. Some dolphins weigh more than others; the smallest Maui dolphin weighs just 90 pounds, while the heaviest Killer Whales can weigh a massive 22046.2 pounds.

There is still much that remains unknown about these majestic marine mammals despite their heft. Questions like how a dolphin's weight differs as per their geographical location have remained unanswered for many years.

As someone with a keen interest in marine life, I should be able to answer any question thrown my way. But when it comes to dolphins, even the most experienced among us may be stumped. So, what is the average weight of these marine mammals? Stay tuned as I dive into this interesting topic.

‍What Is The Weight of The Heaviest Dolphin?

Dolphins are some of the most loved and charismatic creatures on Earth. They are playful, social animals that seem to enjoy interacting with humans. However, dolphins are not just cute and furry creatures; they are also powerful and impressive marine predators.

Did you know that Killer Whales, which are essentially dolphins that can weigh up to 22046.2 pounds? They are the largest dolphin species and can be found in all the world's oceans. They are also considered one of the most intelligent creatures on Earth, and they are known for their playful behavior. Despite being huge, these dolphins still exhibit the playful behaviors that have made them popular worldwide.

In the wild, killer whales are apex predators. This means they sit at the top of the food chain and have no natural predators themselves. They are also among the most social animals in the ocean, living in pods of up to 30 individuals.

While both male and female killer whales can be fierce hunters, the males are typically larger and more aggressive. Male killer whales have even been known to attack and kill other large marine creatures, such as great white sharks.

Where you find Killer whales depends on the pod or group of Killer whales. Some pods live in colder waters, such as the Arctic and Antarctic Oceans. Other pods prefer temperate and tropical seas. A Killer whale is a cosmopolitan species, which means you can find it in all of the world's oceans.

However, different populations have different ranges. For example, the Northern Resident Killer Whales live only in the Pacific Northwest, while others live worldwide.

How Much Does the Smallest Dolphin Weigh?

Maui dolphins are the world's smallest dolphins. You can only find them near the coast of New Zealand. These dolphins are so rare that only about 63 of them are left in the world. Maui dolphins are usually around 59.0551 inches long, and they weigh about 90 pounds. They are very playful and social animals, and they love to interact with humans. Unfortunately, their numbers are declining rapidly.

The Maui dolphin is the world's most endangered marine mammal. With a population size of only 63 individuals, this small cetacean faces many threats to its survival. Maui dolphins inhabit a narrow range off the west coast of New Zealand and are threatened by fishing gear entanglements, fishing, and swimming with dolphins activities. To help protect these animals, we need to learn more about their behaviors and ecology.

How Much Do Baby Dolphins Weigh?

Wild dolphins may be one of the most beautiful animals on Earth, but they can also be quite mysterious. A newborn calf can weigh around 22 to 44 lbs. Researchers have pointed out that baby dolphins can take up to seven years to grow fully. This means that a newborn dolphin is just a fraction of its adult size and won't be able to fend for itself until it reaches maturity. This information is important for conservationists and volunteer networks working to protect these animals from becoming endangered.

How Much Do Fully Grown Dolphins Weigh?

There are many different types of dolphins, and while some may weigh only a few dozen pounds when fully grown, others can weigh up to 308 pounds. This means that they are one of the heaviest mammals in the world. While some people may be surprised by this information, dolphins are quite large creatures. Their size is what allows them to survive in the open ocean. These majestic creatures come in a wide range of colors and have adapted to many different habitats.

The average male dolphin is around 10% heavier than the average female dolphin. While there is some variation between different populations of dolphins, on average, adult males tend to be a little bit bigger and heftier than adult females. But why is this so? Researchers aren't entirely sure, but they have a few theories.

One possibility is that a male dolphin needs to be big and strong enough to compete for mates. Another theory is that male dolphins need more muscle mass to escort their offspring through difficult crossings from one pod to another. However, there are exceptions to this rule.

When most people think of dolphins, they usually picture the popular bottlenose dolphin. And when they see these animals in person, they're often struck by how similar the male and female adult Bottlenose Dolphin look.

Indeed, the two sexes are so similar that it can be difficult to tell them apart without examining certain anatomical features. This is in stark contrast to other marine mammals, such as seals and walruses, where the males are easily distinguished from the females by their much larger body size. So what accounts for this similarity between male and female bottlenose dolphins? Researchers aren't entirely sure, but it may have to do with both sexes playing important roles in parenting and caring for young dolphins in common Bottlenose Dolphin populations.

What Is the Social Life of a Dolphin?

Dolphins are one of the most interesting animals in the world. They have a very social lifestyle, known for their playful behavior. Dolphins live in groups called pods, and these groups can contain anywhere from two to thirty-five dolphins. Each pod has a complex social hierarchy, with a dominant dolphin at the top. Dolphins use vocalizations and body language to communicate, and they often engage in games and playtime. Dolphins are also incredibly smart animals, and they have been known to exhibit problem-solving skills and tool use.

Are Dolphins Always on the Hunt?

A dolphin is one of the most fascinating creatures in the ocean. It is often believed that a dolphin is always on the hunt for food, but a new study has shown that this may not be the case. Researchers observed dolphins spending just as much time playing and socializing as feeding. While it is still unclear why dolphins do this, it could be that they simply enjoy socializing and playtime just as much as we do.

A dolphin shown swimming in the clear blue ocean may give the impression that it is a carefree and happy creature. However, dolphins can be quite aggressive, often hunting down prey with great determination. Dolphins are not always simply enjoying themselves in the coastal water; they can also be very focused on getting food.

Dolphins are often mistaken for fish because they live in the water and have streamlined bodies, but they are mammals. Dolphins breathe air just like we do, and they give birth to live young. They are very intelligent animals, and people often enjoy watching them play in the water. Although dolphins can be found worldwide, some of the best places to see them are Florida and Hawaii.

How Much Does A Dolphin Weigh?