How Much Does A Barbell Weigh? 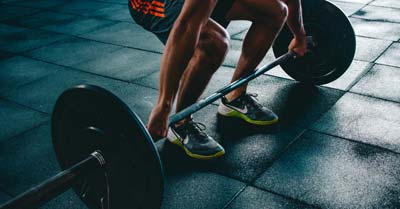 If you have ever been to a gym, chances are you have seen a barbell being used. You may not have used one yourself, but the odds of you going to the gym and NOT seeing someone use one are pretty slim. A barbell is one of the most popular weights for weightlifters to workout with. This has been the case for a very long time now. If you haven’t yet tried to use a barbell yourself, you may be wondering if it is going to be too heavy for you. So long as you have someone there to spot you, you will probably be just fine.

How much does a barbell weigh?

The standard weight for a barbell is about 45 pounds (20.4 kilograms). A women’s barbell will weigh significantly less, just 35 pounds (15.8 kilograms). This article will cover everything you need to know about barbells, what they are made of, and ultimately why they are so heavy.

What is a barbell used for?

A barbell is a very historically popular piece of exercise equipment for strength training. Barbells can improve your upper body strength very quickly, as well as your lung capacity. It is a very hard work lifting a barbell, that’s why it is even a sport (albeit a minor one) at the Olympics. A barbell is essentially just a metal bar with weights on each end. The weights vary from person to person. Not just from men to women but for the individual. While it is true that the average weight of a barbell is 45 pounds (for men) or 35 pounds (for women) they can be almost any weight.

Can barbells be heavier than 45 pounds?

Yes, barbells can be far heavier than 45 pounds. They can also be slightly less. 45 pounds is more than enough weight for the average person, any more than that and you may be at risk of injuring yourself. Any less and you won’t be working your muscles out too much. As you get stronger and more confident, you may decide that it is time to increase the weights on your barbell. It is important to note that you must increase the weight equally or you risk injuring yourself. If you add 5 pounds to only one side you are just going to fall over. The world record for the barbell is 734.8 pounds (333.3 kilograms). This is truly an insane feat of strength. The average weight for a man in the United States is just shy of 200 pounds (197 ish). This means the world record barbell lift was the same as picking up more than three and a half fully grown men.

Why are barbells so heavy?

Barbells are so heavy because that is the only way they will improve your strength. There are arguments to be made when it comes to building muscle that repetitions are more important than sets. Meaning, lifting smaller weights lots of times will be better than lifting heavier weights less. However, when it comes to pure strength and muscle mass it is better to lift as much as you comfortably a few times. This simply means that if barbells didn’t weigh as much as they do, they wouldn’t make very good exercise equipment. This is also why it is so important to have someone spotting you when you lift a barbell. The huge weight that you will be lifting can potentially cause you very severe injuries.

What are the risks of using a barbell to workout?

As mentioned above, there are inherent risks when it comes to using a barbell to workout. Lifting such a huge weight above your head is risky. If you drop it, it could do a LOT of damage on the way down. For example, if you were to drop it on your neck you could even kill yourself. Even if you have a spotter to stop you from dropping the weight on yourself you can still pull and strain muscles. Trying to do too much too soon can cause long-lasting injuries to your joints and muscles. It is better to start at 45 pounds and gradually work your way up in weight.

Hopefully, you now have all the answers to any questions you may have had about how much a barbell weighs. A barbell might typically weigh just 45 pounds but that is only the starting point. As mentioned above, someone has lifted a barbell weighing 734 pounds. It will be a while before someone beats that record, as that truly is an astonishing number.

How Much Does A Barbell Weigh?