How Much Does A Elephant Weigh? 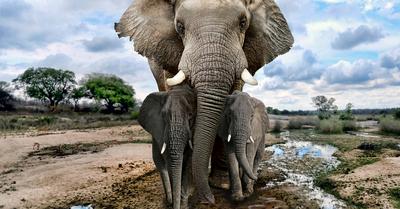 ‍If you didn’t yet know, this still wouldn’t come as a surprise that elephants are the heaviest land mammals, which leads you to wonder: how much does a elephant weigh?

Elephants are quite graceful and loving creatures with an overall quiet and loving nature. One aspect that particularly stands out and intrigues many in these animals is their gigantic size. Well, surely, most people are aware that elephants are the heaviest and largest land animals on earth, a fact which is often followed by a curiosity-loaded question regarding their average weight.

Although the average weight of an elephant can reach up to 13,000 pounds, surprisingly enough, the largest elephant on earth had a recorded weight of 24,000 pounds. This fact proves that there are some extremely rare cases in which an elephant can have a truly extraordinary weight. Another interesting fact is that elephants can live for up to 60 to 70 years, which gives them ample time to grow till they reach a certain weight.

With that said, we have put together this article after rigorous research to enlighten you about the average weight of the different elephant species.

‍How Much Does a Elephant Weigh According to Species

An elephant’s weight can vary from species to species, which is why in this section, we’re going to start from the heaviest elephant species to their comparatively lighter counterparts.

Also known as the bush or Savanna elephant, the African elephant is the heaviest and biggest of all the species. These elephants are found mainly in African Countries that are in West Africa, South Africa, and Sub-Saharan Africa. Growing up to a height of 30 feet from trunk to tail, these elephants can weigh more than 13,000 pounds or 6 tons and stand as tall as 12 feet at the shoulder.

At the time of its birth, an African Bush elephant calf weighs approximately 205 pounds. The tusks of the male counterparts of this species grow faster than females and have a mean weight of 51 to 99 pounds. Generally, Savannah elephants are herbivores as they feed and munch on herbs, grasses, and creepers.

The Asian Elephant, also known as the Elephas Maximus, is the second biggest of the elephant species in the world. As the title suggests, this species belongs to Asia and is popularly found in the south and southeast parts of the continent.

The Elephas Maximus has an average length of 20 feet and stands tall at an average of 8 to 10 feet, almost 6 meters in length, and 2 to 3 meters in height. Smaller than the average African elephant, the average Asian elephant weighs anywhere between 4,000 to 10,000 pounds, approximately 2 to 5 tons.

Also known as the Loxodonta Africana, this elephant is the smallest of the living African species. Smaller than the African bush, the forest elephant weighs around 5950 pounds or 2.7 tons and stands up to 3 meters at the shoulder.

Both male and female African forest elephants have straight, downward-pointing tusks that erupt when they are 1 to 3 years. Their tusks can grow up to 1.5 meters long and be as heavy as 50 to 100 pounds.

As a subspecies of Asian elephants, Borneo elephants are found in northeastern Borneo in Indonesia and Malaysia. The average weight of a Borneo calf is around 200 pounds or 90 kg, while an adult Borneo elephant weighs between 6,500 and 11,000 pounds. These animals can grow up to 9.8 feet and are generally tame and passive with interesting trunks.

As the largest and darkest Asian elephant, Sri Lankan elephants are a rather interesting subspecies. These elephants feature patches of pigmentation on their face, ears, trunk, and belly, but they stand tall and utterly stunning nonetheless. After all, hundreds of thousands of people from around the world voyage to Sri Lanka to visit the elephant orphanages.

The average Sri Lankan elephant calf weighs around 220 pounds or 100 kg, while the adults grow up to 3.4 meters and can easily weigh up to 12,000 pounds.

Sri Lankan elephants are typically found in the north, east, and northeastern parts of Sri Lankan and are hard and dedicated workers.

Found mainly on the Sumatra Island, the Sumatran elephant is a subspecies of the utterly famous Asian elephant.

As one of the subspecies of Asian elephants, Indian elephants are lighter colored than Sri Lankan elephants but much darker than Sumatran ones.

Female Indian elephants are much smaller than their male counterparts and have short tusks. The biggest Indian elephant was said to have been around 3.43 meters at the shoulders. Unfortunately, this elephant species is currently endangered due to elephant habitat loss, deforestation, and poaching.

How Much Does a Baby Elephant Weigh?

An average baby elephant weighs between 170 and 250 pounds at birth, standing about 3 feet or 1 meter tall. Newborn elephants are obviously much tinier in comparison to their adult counterparts, weighing around 2 to 4 percent of the average adult elephant.

Generally, newborn African elephants weigh up to 364 pounds or 165 kg, while newborn Asian calves have an average weight of 200 pounds or 91 kg. In 2020, the Houston Zoo welcomed an Asian elephant calf that weighed a whopping 326 pounds!

Baby elephants consume approximately 11 liters of their mother’s milk daily, and much like humans, are born with an under-developed brain, which makes them highly dependent on their mother.

How Much Does an Elephant Trunk Weigh?

An elephant’s trunk is a combination of its upper lip and nose, with the nostrils located at the tip. Elephants use this body part for smelling, drinking, breathing underwater, and picking for food. Moreover, they also use their trunk as a hand to hold and grip items.

If you’ve ever witnessed a live elephant, you surely know how large its trunk can be. Hence, given the mammoth size of their trunk, you can expect it to weigh accordingly.

Generally, the average adult elephant male’s trunk weighs about 290 pounds or 130 kg, with the ability to lift a load of up to 250 kg. An elephant’s trunk is exceptionally heavy and probably one of its most distinguishing features.

It is important to note that an elephant trunk isn’t complete at birth. Baby elephants are born with short trunks compared to the rest of their body. These trunks gradually extend and grow over time as they age.

How Much Do Elephant Tusks Weigh?

Besides their trunks, elephants have another distinguishing physical feature that contributes significantly to their weight – tusks. Tusks typically emerge when an elephant turns two years old, starting as large incisor teeth that curve upwards and continue to grow.

Elephant tusks are so heavy that the average human will struggle to even lift them off the ground.

The heaviest elephant tusk ever weighed was a whopping 103 kg, which makes it quite evident as to why elephants are huge targets for poachers.

How Much Does A Elephant Weigh?