How Much Does an Atom Weigh? 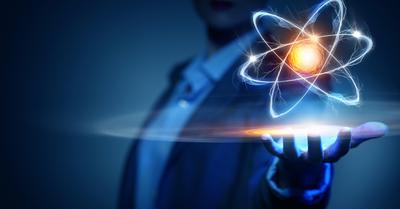 ‍If you’ve ever caught yourself wondering, ‘how much does an atom weigh?’, you’re not alone.

Though we say that atoms are the smallest form of matter, they are made up of subatomic particles, and since each atom has a different number of these contained inside, the mass of an atom varies according to its element.

There is plenty of research done in the science of atoms – from their mass and structure to how they work. In this article, we have collected all of this information and put it together.

‍What Contributes Towards the Mass of an Atom?

To understand the mass of an atom, you need to first know the structure. To put it simply, an atom consists of a nucleus, which contains protons and neutrons, and energy levels or ‘shells’ which contain electrons that are orbiting the nucleus.

The mass of an atom – called the atomic mass, denoted by m or ma – is calculated by measuring the mass of all the subatomic particles within the atom. This is also often expressed by the non-SI unit atomic mass unit or amu, as well as Dalton (Da). 1 amu is equal to 1 Da, and is defined as 1/12 of the mass of a single, at-rest Carbon-12 atom.

Each of these particles contributes towards the mass, albeit in different ways. The nucleus accounts for almost all the mass of an atom, since the relative mass of protons and neutrons is much higher than that of electrons.

Therefore, if the mass of a neutral, at-rest Carbon-12 atom is 12 amu, this is because it contains 6 protons and 6 neutrons. The 6 electrons have a very insignificant mass in comparison, and therefore, do not contribute very much towards the overall mass of the atom.

Since any neutral atom will have an equal number of electrons and protons, the mass of the atom as a whole will always be dominated by the number of subatomic particles in its nucleus.

of one proton, we do not consider it as part of the standardized atomic mass, even though electrons play a very significant role in the atom’s chemical composition and properties.

That said, electrons within the atom do contribute very small amounts towards atomic mass, if you actually calculate it perfectly. This is very difficult, however, and is also why we use standardized atomic mass in science.

The total mass of an atom will also be slightly less than the sum of masses of its subatomic particles due to the loss in mass because of nuclear binding energy (as per Einstein’s theory of mass-energy equivalence).

While we understand that atoms have standardized mass, we should also understand what isotopes are and how they contribute to atomic mass.

Every element has a fixed number of protons and electrons. This also happens to be equal. However, elements may have neutrons in their nucleus, and these neutrons do not contribute anything towards the chemical composition or properties of an atom.

While neutrons are usually also of a fixed number, sometimes this number varies between atoms of the same element.

For example, hydrogen atoms will usually have one proton and one electron, but sometimes they may contain one or two neutrons. These are called isotopes and since neutrons do contribute towards atomic mass, isotopes have a different mass than what is standardized.

This is why we differentiate between the two by referring to the most commonly occurring isotope as relative atomic mass, and others as relative isotopic mass.

How to Measure the Mass of an Atom

The mass of an atom is measured using Newton’s second law of motion, that states that an object of a certain mass m will have a certain acceleration when a force f of a certain value acts on it.

The instrument used to carry out this experiment is called a mass spectrometer. Modern techniques of this process can be traced back to the early 1900s, though other similar experiments were carried out much earlier than that.

How does a Mass Spectrometer Work?

The first step in this process is to ionize a gas by firing a beam of particles at it. Depending on the type of beam used, some of the atoms of the gas will either lose electrons, or gain new

ones. Because of this, the atoms will become either positively or negatively charged, and will thus form ions.

These ions are then passed through a tube that has electric and magnetic fields that exert force on these ions. Because of the electric force, the speed of the ions will change, while the magnetic force will alter their path.

The ions are then collected into a Faraday Cup at the end of the tube. This is a metal cup that is designed to attract charged particles within a vacuum. This results in a current being generated where the wires are attached to the cup. Physicists can then measure when and where the ions hit the cups, and thus determine what acceleration they were moving at due to the electric force, as well as the direction the magnetic field had taken them in.

Then, because you have the force as well as the acceleration, you can use Newton’s second law of motion f=ma to calculate the mass of the ions. We do the same thing with the electrons.

Now, since we have the measurement for both mass and electrons, we are able to add and subtract accordingly to find the mass of the original atom that did not have any excess of loss of electrons.

Though we cannot say that the mass we measured is completely accurate, we do come pretty close. The atomic masses of elements are determined and standardized through this process and is accurate enough for scientists to use in their research and experiments.

What is Atomic Weight and How is It Different From Atomic Mass?

You may have heard the term ‘atomic weight’ before, and might wonder, what is the difference?

If we said that we use atomic mass in science, why does atomic weight even exist?

This is because atomic mass is the individual mass of an atom whereas atomic weight refers to the weighted mean of all the masses of naturally occurring isotopes. We talked about isotopes earlier, but let’s consider this with an example.

In the periodic table, you find elements with their weighted average atomic mass. Chlorine has an atomic mass of 35.5. This is not because it has half a proton or neutron that contributes towards its mass, but because of the existence of isotopes.

Though the mass and weight of atoms are complex and difficult to measure, scientists have done a lot of work in researching this, and thus provided us with the answers.

How Much Does an Atom Weigh?