How Much Does an Electron Weigh? 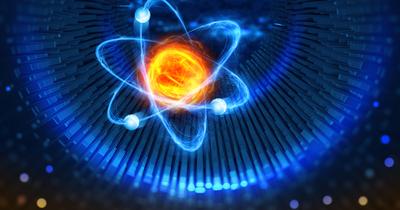 ‍The size of an electron, compared to an atom, is like a pea in a football field - that's how small they are. But at that size, how much does an electron weigh?

Though we are more accustomed to using the word 'weight' in our daily lives, we are usually talking about the mass of an object. For regular items, this measurement is relatively simple, but for particles as small as electrons, it gets a bit more complicated.

Since subatomic particles are so small, there are other units, besides grams and kilograms, for measuring their mass that we will look at. The Committee on Data for Science and Technology (CODATA) recommends using 9.109 x 10-31 kg as the constant value for electron mass.

‍How Many Electrons Are In One Gram?

If you think about it, the entire world runs on electrons. They are what give you electricity, run your cars, power the device you're reading this on, and yet they are so small. It would take 1.1 x 1027 electrons to measure one gram. That's a little more than a trillion, trillion electrons!

It is the bizarre nature of the universe that such tiny particles are what determine the properties of everything in the universe - from the behavior of the atom to the largest stars in our galaxies.

How Was Electron Mass Measured?

With this number, Robert Millikan and Harvey Fletcher used the known charge to calculate the mass. Oil droplets were sprayed into an electrical field. The oil drops picked up electrons and the mass of the droplet could be determined from its size. Since the gravitational force is known, and the electric field strength was adjusted to balance the gravitational force, it was simple to determine the charge of the electron, Q.

Modern science uses slightly different methods to calculate this value, but all methods use the mass-to-charge ratio to derive the value for mass.

Of course, it is important to remember that these are approximate values. There is a relative standard uncertainty of about 3 x 1010. As research progresses and methods of scientific research improve, we may eventually be able to eliminate this uncertainty as well.

Other Units of Measurement

Since atoms and subatomic particles are so small, they are rather difficult to study. Most research around them involves relative values - that is, in comparison to another known value.

The mass of an atom is calculated relative to the mass of an unbound Carbon-12 atom that is at rest, at its lowest energy state.

You will usually find electron mass presented as a ratio to the mass of a proton, as 1/1836. In fact, the mass of an electron is so negligible in comparison to protons and neutrons that when measuring the relative atomic mass, electron mass is dismissed.

According to this formula, a small amount of mass (when an object is at rest) can correspond to a large amount of contained energy that does not depend on the composition of matter within the object, or on the momentum.

Keeping this in mind, we can also say that the 'mass' of an electron is about 8.187 × 10−14 joules. The joule (J) is the SI unit for energy, so it may seem odd to represent the mass of an electron using energy. However, since certain amounts of mass correspond to certain measures of energy, we can infer that the gain and loss of energy due to transformation will also result in an increase or decrease of mass.

How Much Does an Electron Weigh?